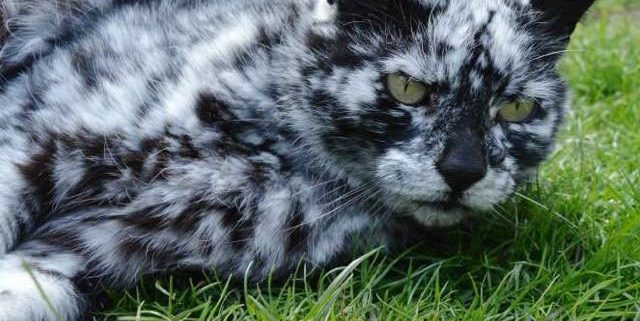 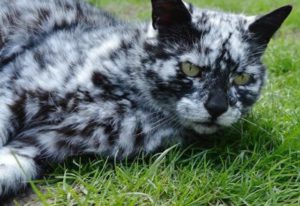 Leukoderma (“white skin”), leukotrichia (“white hair”) or vitiligo, is a cosmetic condition that produces a “cobweb” or “snowflake” effect and is most easily seen on black cats. White spots appear on the coat; these become more extensive with age until the cat has a white lace pattern on the black fur. Ultimately the cat may go completely white or be left with diminishing isolated patches of colour. This condition has been seen in black leopards (“cobweb panthers”), humans, dogs and other animals. This must not be confused with the normal sprinkling of isolated white hairs which appear in a cat’s fur during its lifetime. “Leukotrichia” is a generic term. Acommon term is “piebaldism” because it causes white patches in the skin and fur. It is an “aquired depigmentation” that occurs during the cat’s lifetime, is usually progressive and may be triggered by illness or environmental factors. Ultimately, a cat with leukoderma may become almost entirely white. Antibodies are formed against the pigment-producing melanocytes. The melanocytes are destroyed leading to the white areas. It is a cosmetic condition that doesn’t affect health except for the increased possibility of sunburn to depigmented areas. A type of leukoderma has been identified in some Persian cats and these are used as laboratory subjects in the study of depigmentation conditions. Periocular leukotrichia, causes the fur around the cat’s eyes to become pale – as though the cat is wearing spectacles.

Vitiligo is one form of leukoderma. Originally this was thought to be rare in cats, but thanks to social networking and the internet, more and more cases are coming to light. it usually causes loss of pigment on the face and feet. Antibodies are formed against the pigment-producing melanocytes. The melanocytes are destroyed leading to white areas of fur or pink areas of skin. This form of vitiligo has been found in cats derived from South-East Asian stock i.e. Siamese, Burmese and related breeds. This may be due to the founder effect where early imports, or an influential stud, passed on the gene(s) for vitiligo. Those genes might not be expressed unless triggered by some external event e.g. stress or illness (both of which release stress hormones).

In human medicine, vitiligo is classed as an immune system condition and subdivided into segmental and non-segmental. Segmental vitiligo tends to occur around the teenage years and forms a stable, usually unilateral (asymmetrical) pattern. It affects areas of skin associated with dorsal roots from the spinal cord. It is predictable in how in progresses. Segmental vitiligo is rapid-spreading on the skin and (in humans) can be treated with ointments. Non-segmental vitiligo exhibits a degree of symmetry in the location of the white patches (e.g. occurs on both hands, not on one hand) and can be generalized over large portions of the body or localized to a particular area. It can occur at any age and is categorized as follows:

Human studies indicate that changes in the immune system are responsible for the condition and that both underlying genetics and environmental triggers are involved. In other words, an individual may inherit (and pass on) the genetic potential for depigmentation, but it takes some other factor to start the depigmentation process. That other factor could be age or hormone related or it could be illness or stress. However, most vitiligo seems to be “unknown origin” with no obvious triggers and we don’t know what has started the process.

There are several types of leukotrichia found in mammals. Luckily cats don’t seem to get the painful versions that cause lesions and crusty skin in horses.

TYPES OF VITILIGO SEEN IN CATS

Although no genetic analysis has been done, visual inspection suggests there are several forms of feline vitiligo that develop in different patterns. Until there’s more genetic/veterinary information I’ve simple classified these by visual effect.

White speckles appear throughout the coat; these become more extensive with age until the cat has a white lace pattern on the black fur. Ultimately the cat may go completely white or be left with diminishing isolated patches of colour. This condition has been seen in black leopards (“cobweb panthers”) and similar conditions are found in humans, dogs and other animals. This must not be confused with the roan pattern, the “Salt and Pepper” mutation or the normal sprinkling of isolated white hairs which appear in a cat’s fur during its lifetime. This should not be confused with the “Salt and Pepper mutation” in Eastern European cats which develops early on, but stabilises to give a “reverse colourpoint” effect.

“Charva” (Jason Reeves) has vitiligo; she was a black cat with patches of slightly longer/softer black hair. In 2009 she turned 4 and developed a patch of white hair. Since then the patches of white have turned into stripes, spots, and patches. Her skin is turning pink as well due to the loss of pigmentation.

In this form of pigment loss, white spots and small patches appear on the fur, exactly like snowflakes. Just like snowflakes, the white patches increase in number until the cat has little or no original colour left.

Pam Pramuka’s cat “Aka” was adpted at about 2 years, all black but with a scattering of individual white body hairs that were longer than her base coat. By 2 years 6 months she had developed widespread white ticking and some splotches, which continued to grow until age 3. By 3 years and 6 months, the patches stopped forming, or formed only slowly so that the pattern seemed to have stabilised. Aka was a a shelter kitty, taken in as a stray.

One of the most stunning examples is this photo which has been popping up all over the internet with people questioning its authenticity. It’s a black cat with advanced vitiligo; the white colour now dominates the coat.

Vitiligo is not confined to black cats, but may not be as obvious on other colours. In 2011, Kimberly Sexton of New York City sent these photos of her cat Frankie. Kimberly’s 14 year old cat Miko (white with grey markings on his head and tail) had recently died and in his last 3 years had formed a close bond with her younger cat, Frankie, a mackerel tabby. The two cats often slept intertwined. Two years before Miko passed away, Frankie developed a white spot of fur under his neck, while his chin and nose became paler. As time passed, Frankie’s white areas spread and new ones developed around his neck and behind his shoulder blades. Kimberly joked to friends that Miko’s white colour was rubbing off on Frankie as they slept! Frankie’s white areas are likely to continue spreading, but the effect appears entirely cosmetic.

Ulli wrote to me about black Persian cat Meriadoc. Meriadoc was pitch black until 3.5y old. In the summer 2012 he started with getting white eye lids. However, since being shaved, his fur has reverted to black which suggests (to me) the pigment loss was temporary due to illness or even stress.

Vitiligo is not confined to black cats, but is harder to spot in lighter colour cats. Colleen O’Kelly, a physician in the USA, has a lilac-point Siames called Gracie tht has vitiligo. Her point colour was normal as a kitten, but over time her ears have become cobwebbed with white and her muzzle is now showing a similar lightening. Most strikingly, her nose has lost its dark pigmentation and her whiskers on one side have turned white.

This pattern of pigment loss is found in cats with South-East Asian ancestry i.e. cats with Siamese colour restriction, Burmese colour restriction and the intermediate mink pattern. This suggests the tendency to develop white patches was inherited from an early import or from an influential stud. Some breeding lines are more affected than others and some appear unaffected. Pigment loss is primarily on the lips and nose leather, where it is noticeable, and also on the paw pads. In “Gracie” the ears were also affected.

Dax is a Snow Bengal owned by Gemma Kernich. He has Acrofacial Vitiligo. This causes pigment loss in fingers (in cats: paw-pads) and around body orifices (e.g. mouth, nose, anus and genitalia) and is found in some colourpoint cats. Dax had black paws, nose and lips at the beginning of 2016, but by August 2016 – when Dax was almost 24 months old. Gemma had researched Dax’s pigment loss and discovered that trauma can trigger the gene. Dax broke his hip aged 10 months and required surgery, but Gemmabelieves the depigmentation on his nose had started before this trauma.

Neptune is owned by Karen Tanner and has turned from black specked with white to white speckled with grey! At the same time, he has some unique white markings on his face, and his nose has turned black at the same time as his fur lightened. Karen acquired Neptune from a Humane Society in San Jose, California in 2001, when he was at least 1 year old and already neutered (so no possibility of seeing if his trait is hereditary). In earlier photos he is black with white speckles and a pink nose, plus an unusual white splotch on his tail (which is now more or less gone as his colour changed). His fur started getting gradually lighter and his nose darker. By 2004 he still had a pink nose and the white splotch on his tail, but by 2012 he looks a pale grey and his white splotches are harder to discern.

Generalised pigmentation loss, starting with isolated white spots, can occur on any colour coat. Saara Tuovinen from Finland wrote to me in February 2016 about her registered classic red tabby British Shorthair called Oliver. He is a little over 2-years-old and since the age of 1.5 years he developed an increasing number of a white spots on his fur. Oliver has been used as a stud once (with a bicolour female) after conferring with judges at the international cat show. Saara wanted to rule out the silver gene because Oliver has ancestors with silver. Olivers’ father (chocolate tabby) has some de-pigmentation on the paws, only noticeable at the age of 2 years which was after he had sired 7 kittens. Oliver has 5 full siblings and one half-sister (chocolate spotted) from same father. His half-sister developed some depigmentation at the paws at the age of 5-6 months, but none of his full siblings have developed white spots. By August 2016, none of Oliver’s offspring (7 months old) had any signs of vitiligo, but Oliver himself had become more white than red. Like Neptune (above) the depigmnentation is most porminent on the muzzle and the tail (from base to half-way along).

On coloured cats, hair regrowth around scars is often white. Some dark coloured cats show white hairs in their coat as they grow older – some follicles stop producing pigment, just as humans get “grey” hairs. Unlike the cobweb effect (where pigment loss occurs in patches, like snowflakes or strands of gossamer), age-related white hairs are evenly sprinkled across the body giving a salt-and-pepper effect; there may also be greying around the muzzle. It is a normal part of ageing although cats seem far less prone to getting grey hairs than do dogs. It should not be confused with the white patches found in vitiligo. In “Salt and Pepper” muttion in Eastern European cats, the pigment is lost at the points, but this stabilises into a distinctive pattern.