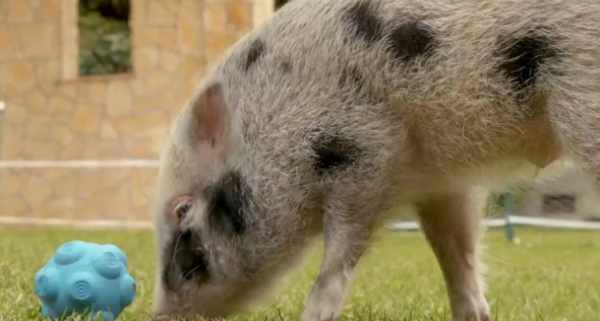 Compared with dogs, little research has been done on how domesticated pigs interact with people.

Pigs and dogs share a lot in common—they’re both intelligent, friendly animals that often makes them attractive as household pets.

Ongoing research on how dogs communicate with people have revealed that canines are closely attuned to our emotions, and can detect even the most subtle of feelings.

But little similar research has been done in other domesticated animals, such as “mini-pigs,” a catch-all term that characterizes just about any small-breed pig. (See amazing photos of wild, warty pigs.)

Pig ownership has increased in recent years: Since 1998, for instance, the number of mini-pigs in the United States and Canada has risen from 200,000 to perhaps as many as a million. But due to some irresponsible breeders, many people get tricked into buying a pig without realizing there is no such thing as a mini-pig—all pigs, miniature or not, get big, and the majority of these animals end up in shelters or are euthanized.

But because many people worldwide still keep pigs as companions, it’s important to learn how the animals interact with their owners.

In the new study, the scientists compared how four-month-old piglets and puppies, with no training, responded to human cues.

The results, published recently in the journal Animal Cognition, show similarities between barkers and oinkers, but overall reveal that pigs are less responsive to people than are dogs.

Of course, dogs have a leg up, so to speak.

“Dogs’ domestication dates back to more than 15,000 years, while pigs’ [domestication] is less than 10,000 years,” says study leader Linda Gerencsér, an animal behaviorist at Eötvös Loránd University in Budapest.

In the first experiment, the scientists recruited 10 Minnesota and mixed breed mini-pigs and 10 dogs of 8 various breeds from homes in Hungary.

Each animal was placed in a room with its owner and a female experimenter. The experimenter then gave the subject food at two-minute intervals and observed its reaction between feedings. (See pictures of curly-haired domestic pigs.)

Both the puppies and piglets oriented toward and touched the experimenter with equal frequency.

When the expected food was not given, though, only the puppies continued looking toward the person’s face, while the pigs lost interest and went their own way.

That could be because pigs are very motivated by food, Kristina Horback, assistant professor of animal science at the University of California, Davis, by email.

Wild and feral pigs forage for eight to 10 hours a day, she says, and as omnivores they will gather as much food as possible in their environment.

In the second experiment, scientists wanted to see how the animals—nine mini-pigs and nine dogs this time—reacted to the human gesture of pointing. In front of each study animal, the experimenter stood between two solidly colored containers—on the floor, one empty and one with food inside—and pointed to the one with the food in it.

Only the dogs responded to pointing, following the gesture to the bin containing food. The pigs chose one container randomly, and kept going to that side every time.

A history with humans

Given the respective histories and anatomy of the animals, the results are easy to understand, the scientists say.

Dogs, for instance, have been bred for “working closely together with humans, meaning that it became important for them to seek information about human attentional states,” Gerencsér says.

Dogs even evolved specialized eyebrow muscles that give them those sweet facial expressions, a trait their wolf ancestors don’t have.

Pigs, conversely, were selected for “optimizing meat production,” all of which “might explain to some extent pigs’ overall lower tendency to orient toward the human face,” she says.

Horback also notes that dogs look for more visual cues, such as bared teeth or flattened ears, in their kin, whereas pigs will often rely on their sense of smell from a fellow pig’s mouth and snout.

Anatomy may also play a role. Pigs also have less flexible necks than do dogs, and can’t raise their heads for long periods—factors that may have impaired their ability to perceive the experimenters’ hand gestures, Horback notes.

“Pigs can be trained to follow a human hand to receive a reward,” says Horback, who has trained many adult female pigs to follow her hand in order to use a touch screen or joystick with their snout to receive food rewards. (Watch Pigcasso, a famous painting pig, at work.)

In general, she adds, the research “did a great job” showing similarities in the “human-orientation behaviors of human-reared pigs and dogs.