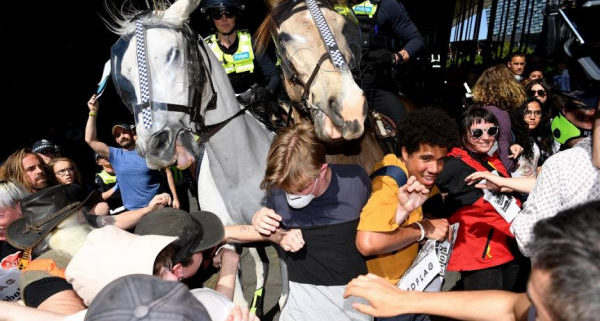 Modern police have been quick to embrace technology, with body cameras recording arrests, computers able to pull up your details in seconds and drones equipped with lights and sirens flying around to monitor social distancing.

But an ancient method of policing has retained its place despite the march of technology.

The centuries-old police horse has re-emerged as an extremely effective crime-fighting tool, beyond just keeping the drunk and disorderly at bay.

That is to say, they’re not just one-trick ponies.

“If you’ve got one horse, it’s like having 10 coppers on the ground,” said Senior Sergeant Glen Potter, the head of Western Australia’s Mounted Police section. 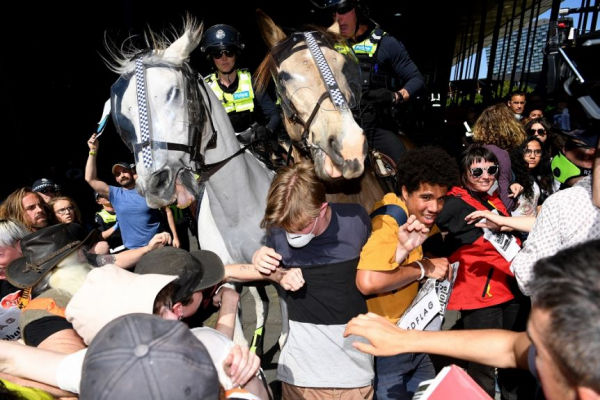 Police horses and their handlers often find themselves in chaotic and dangerous situations. (AAP: James Ross)

“I mean, there’s no denying there is an intimidation factor there — if I need to break up a brawl, I can manoeuvre the horse into the brawl and separate it.

“People generally go, ‘wow, OK, a horse’ and they back off. It completely reduces the tension.”

Police horses are etched into the public memory for being both a point of stability and force in turbulent situations, keeping order at mass protests, riots and large-scale events.

But they are also regularly required in remote areas of the country for search and rescue operations.

“We can cover a lot of ground with less people and at great height. We can go through some pretty thick bush, we can see far ahead,” Senior Sergeant Potter said. 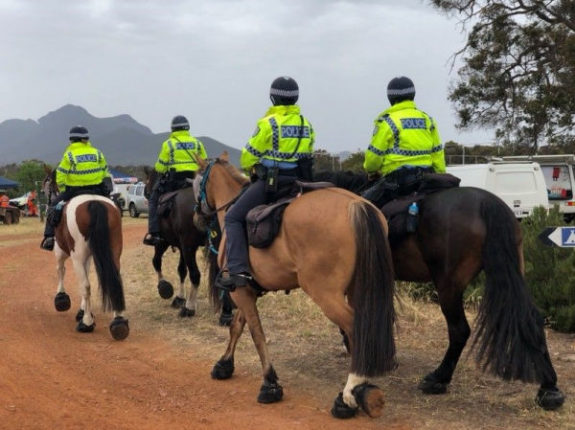 “We save [a] significant amount of human resource and financial expense on a number of large searches where in the first hour, hour and a half, the team have located the missing person.”

But for Senior Sergeant Potter, who has been around horses his whole life, the true value of the mounted section lies in people’s fascination with the animals.

“There’s nothing like a horse to draw people in for discussion and to be remembered,” he said.

“If you see a police vehicle driving down Rokeby Road [a prominent cafe strip in Perth], you wouldn’t think twice … you wouldn’t remember it.

“And that’s the beauty of it. When people see horses and police officers on horses, they remember.

“If we put horses in a neighbourhood, we see a reduction in crime.

“It’s consistent, and it lasts for a few days after we’ve left, which is a good thing. 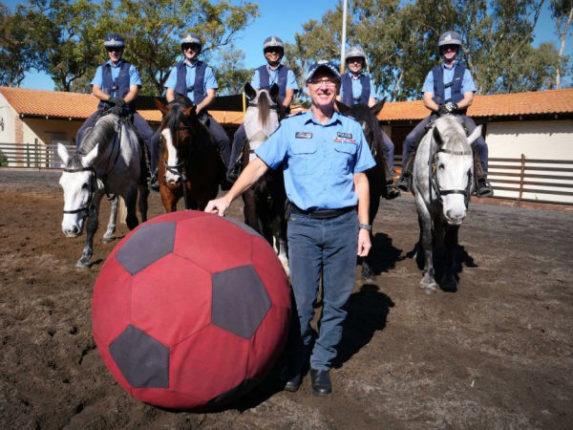 “We actually make a point of talking to people when we’re on horseback.

“They’re a fantastic way of engaging with people, not just crooks, but also good people, the general public.”

Senior Sergeant Potter said horses could bridge gaps with sections of the community that otherwise might not feel comfortable interacting with police.

“I’ve been on many jobs in the country with Indigenous people and quite often, suddenly they love the horse, and they want to come up and see the horse and touch the horse,” he said.

“Then the kids come up, and it’s just a great thing … it’s just wonderful. It really does break down barriers.”

Finding the right horse for the job is a rare feat. It’s a balancing act of the animal’s temperament, size and stamina to work long, gruelling hours on the beat.

“These are working horses — they’re out on average for 10-hour days a week. Not any old horse can do that.” 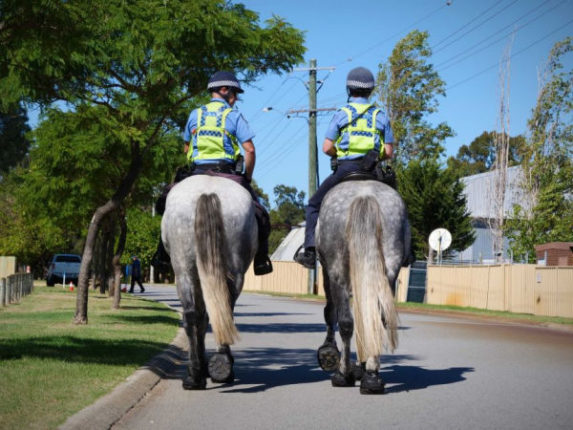 Police horses and their handlers have to navigate long working hours in the saddle.(ABC News: Gian De Poloni)

In scenes of chaos and danger, police horses usually cut a calm and composed figure.

But that placid nonchalance is not instinctive for a horse.

“Horses are naturally a flight animal, their response is to mostly get away from anything that’s troubling them,” Senior Sergeant Potter said.

“Something moving fast coming towards them — aggressive actions, commotion, loud noises — can be something that will spur a horse to go, ‘I’m out of here’.

“You want a horse that is curious about what’s going on, but not reactionary.” 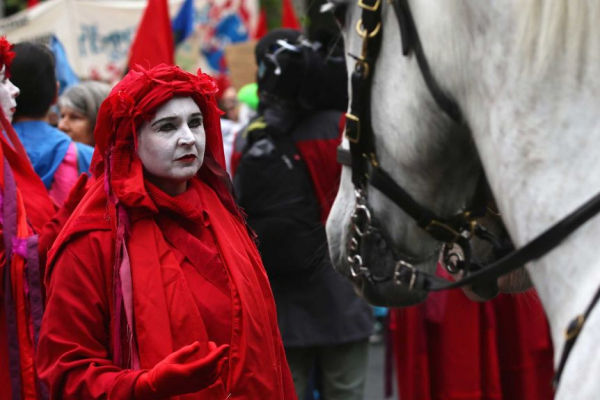 Training sessions involve desensitising horses to those provocative aspects of the job, which can involve mingling them with cattle.

“The horse realises, ‘OK, I haven’t seen a cow before, it’s got big horns, what’s it going to do to me?'” Senior Sergeant Potter said.

“Then they realise ‘I can do something which will cause that animal to move away from me and make me feel more comfortable.’

“We allow them to feel confident in their environment, that they’re not under threat. So then from cattle, we build to people.” 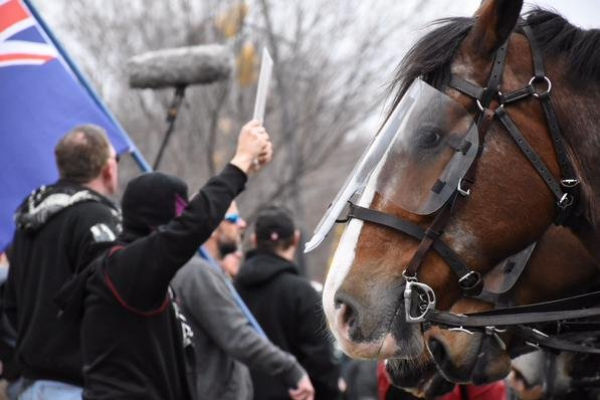 Horses have a flight instinct in the face of danger, but are trained to compose their instincts and react accordingly.(ABC News: Stephanie Anderson)

Senior Sergeant Potter admitted it was a challenge for police handlers to not become too attached to their horses.

“You do get attached to them, there’s no doubt about that,” he said.

“But we are a working horse unit and we’re required to place ourselves and, as a consequence, the horse into areas where they may be at risk.

“While we encourage a bond between the rider and the horse to care for them, we also have to expect that there are times when we have to place ourselves and our horse in danger.

“This horse is your work partner, but also, it’s one of your work tools. It’s no different from any other tool a police officer carries.”

Back in the field after coronavirus

This week, WA’s team of 20 horses and police officers were back on the streets after weeks of downtime due to the coronavirus pandemic.

“As tough as it’s been for everyone, it has been a silver lining for the horses,” Senior Sergeant Potter said.

“It was an opportunity to be actually retraining our horses while they’re here and also bringing on our new horse.” 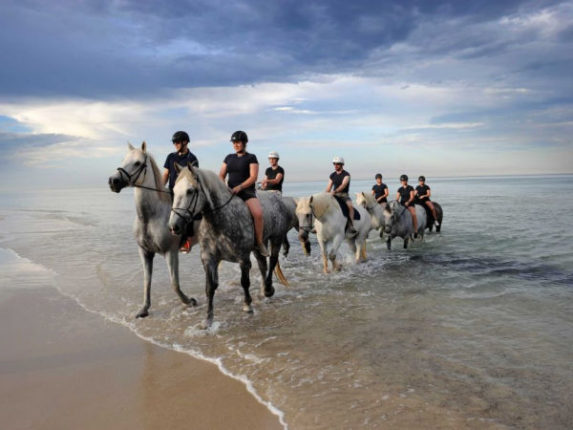 Police officers maintain close relationships with their horse and provide them with care and training.(AAP: David Mariuz)

As Australia’s nightlife slowly returns and people begin to feel comfortable congregating outside again, police horses will become much more visible to the average punter.

Senior Sergeant Potter said if people saw a horse patrolling the city streets, they should stop and say hello, but keep their wits about them.

“The key thing is, don’t touch the horse until you’ve asked permission,” he said.

“They’ll tolerate a stroke and only in certain areas, they don’t like that near their eyes or their muzzle — they have fantastic teeth and can bite.

“Listen to the officer who’s sitting on the horse. If the officers are dealing with someone just hang back until they’re finished.” 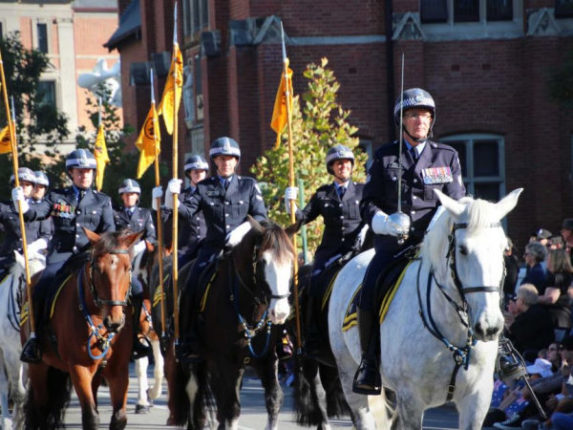 Senior Sergeant Potter will not be on horseback when it is back to business as usual as he is retiring after 43 years with the Force.

“I have no regrets. It’s been an interesting, exciting, adrenaline-filled career,” he said.

“There’s no doubt about it, riding horses is a hazardous occupation.

“But it comes with so many benefits — the freedom, exhilaration, and the bond you have with the horses. 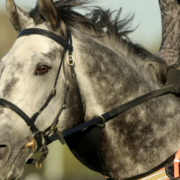 Do Horses Like Humans? A New Study Shows That They Understand Our Emotions