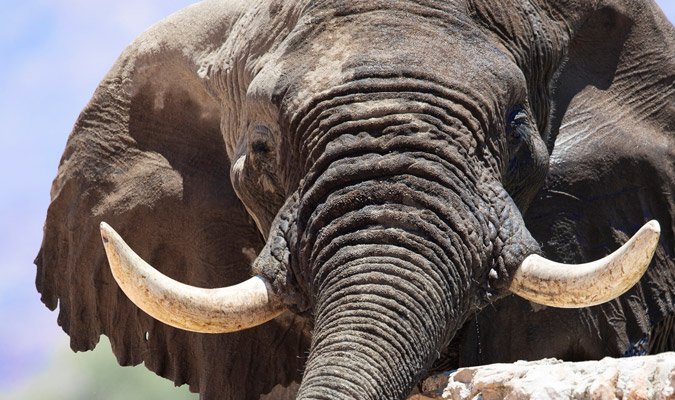 In yet another blow to big elephant genes, the iconic desert-adapted elephant bull known by millions of fans worldwide as ‘Voortrekker’ was killed by a trophy hunter after being declared a ‘problem-animal’ by Namibian authorities. The surgical removal of Africa’s big-gene animals by trophy hunters continues, and Namibia’s desert-adapted elephants now rely on a small population of mature bulls after two were killed in 2016.

In their announcement on Facebook, Namibia’s Ministry of Environment and Tourism (MET) said “the elephant bull concerned was put down after it was declared a problem. The animal alongside others have been destroying properties and infrastructure in the area of Omatjete.” On the issue of whether this bull was the legendary Voortrekker, MET responded to Facebook questions by refusing to name the hunted elephant. Several conservation charities have confirmed that the bull in question is indeed Voortrekker. ‘Voortrekker’ is Afrikaans for ‘pioneer’.

MET spokesperson Romeo Muyunda Lee advised that the price paid was N$120,000 (+/- US$ 8,500), but it is unclear at this stage whether this was the total price paid or the portion paid to communities.

A study published in Ecology and Evolution in 2016 found not only that the Namibian desert-adapted elephants were different from their savannah cousins, but that their adaptations are also not genetically transferred to the next generation, rather through the passing on of knowledge by mature individuals. Morphological differences, like the adapted elephants’ thinner bodies and wider feet, also distinguish them from typical savannah elephants. 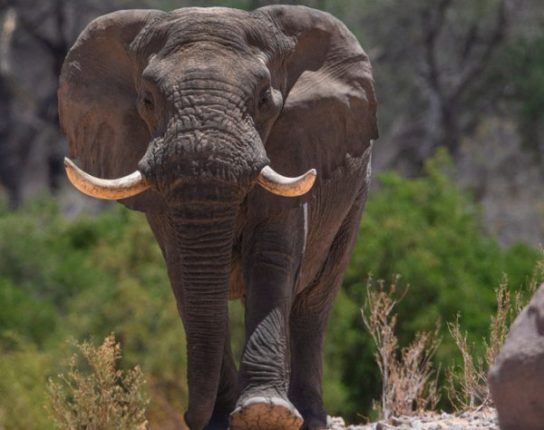 WAS THE WRONG ELEPHANT KILLED?

A Facebook post, written by Informante reporter Niël Terblanché, asks whether it was in fact Voortrekker who was causing problems for inhabitants of the Omatjete area.

Terblanché reports that an urgent letter addressed to MET official Christoph Munwela by management of conservancies neighbouring the Ohungo Conservancy in the area of Omatjete to prevent the killing of Voortrekker, suggests that a flagrant error was made when the hunting license was issued. The letter points out that Voortrekker is in fact not part of the herd that has been bothering the community of the Ohungu Conservancy in the area of Omatjete.

MET responded publically that “The communities who objected to the hunt were not affected by the elephants as the elephants were mainly causing problems in the Omatjete area.”

Prior to the hunt, the management committees of the Otjimboyo, Sorris Sorris and Tsiseb conservancies asked Munwela for a meeting to discuss ways to avoid the killing of Voortrekker, one of the oldest living bull elephants in Namibia. Their letter said: “Our people are in general accepting of the elephants’ presence and want them to remain in the area … it is our belief that the shooting of elephants does not solve the problem. In fact, this only makes it worse. We want to keep our communities safe and to do this we need to ensure that our elephants are calm and relaxed when entering villages. It is our belief that the shooting of elephants or scaring them off with gunshots, screaming or chasing them off results in aggressive animals and this cannot be tolerated.”

MET published photographs that they feel illustrates damage caused to property and infrastructure by Voortrekker, to justify the issue of the hunting license. Some of the images appear to show poorly neglected fences and other infrastructure, but some easily-replaced water pipes and tanks do appear to reflect damage. 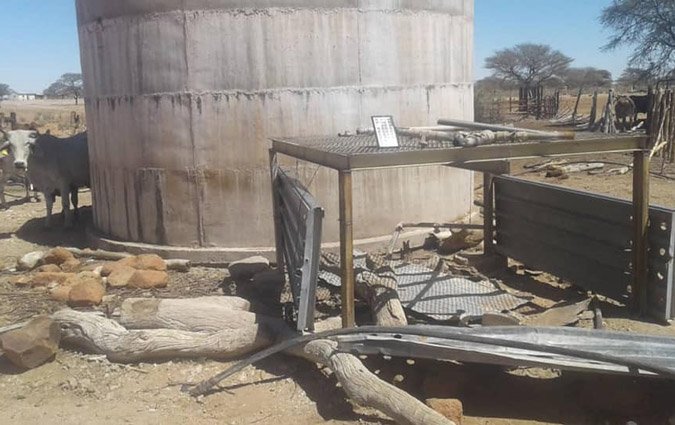 Damage to infrastructure by Voortrekker the desert-adapted elephant, as per MET © MET

In 2008 Voortrekker fans donated US$12 000 to MET in an effort to save him from professional hunters who had their eyes on his trophy tusks. At the time, six hunting permits were issued and only Voortrekker was saved from trophy hunter guns – the remaining five elephants were killed.

According to Johannes Haasbroek of Elephant Human Relations Aid, in the period since then, “the hunting outfitters and their sick clients conspired to get this gentle giant declared a problem to justify a hunt”. He went on to say: “We remember Voortrekker as an incredibly gentle, peaceful and magnificent elephant. His presence has often calmed other inexperienced elephants around him. He was known locally as the ‘Old Man’, that was always welcome because he never caused any problems or induced fear.” 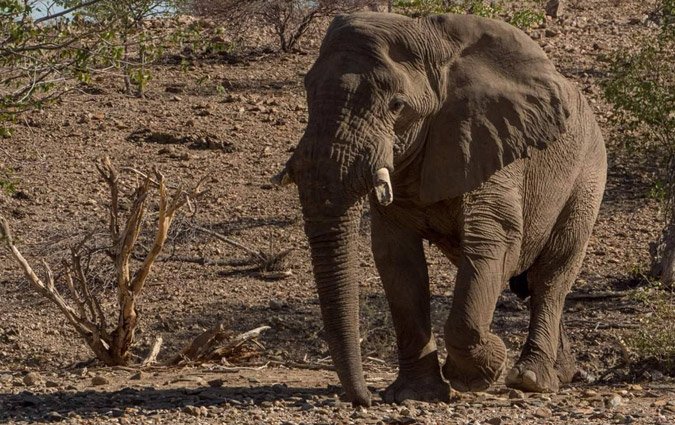 Voortrekker the desert-adapted elephant after his tusks snapped off. This photo was taken 7 weeks before his death © Aschi Widmer

According to respected safari guide Alan McSmith, Voortrekker was a pioneer elephant for the desert-adapted elephant population in the Ugab and Huab rivers region. This giant elephant was one of the first to venture back to the region after populations were decimated during the turbulent warfare years in southern Africa. A small group of these uniquely desert-adapted elephants took refuge during the war in the remote and desolate gorges of Kaokaland in the north.

Says McSmith: “Voortrekker, one of the bulls to trek north during the conflict years, returned home in the early 2000’s, commencing a relay of south-bound expeditions, penetrating deeper and deeper into the dry and uncertain landscape before commencing with an epic traverse through to the relative bounty of the Ugab River. It was a marathon across arid plains and ancient craters that would ultimately redefine what we know of elephant endurance, intuition and behaviour. Just how he navigated, or knew where to find water, is anyone’s guess. For over two successive summer seasons he returned north to Kaokaland, returning each time to the Ugab with a small family unit in tow. An elephant patriarch. These elephants are still resident in the region and have formed the nucleus of three distinct breeding herds, making the Ugab/Huab Rivers perhaps the most viable desert elephant habitats in the world. Voortrekker continues as the Godfather, a true legend of the Ugab. His ancestral knowledge has been passed down to a new generation of desert dwellers. What a legacy! For me, all of this addresses one of the most crucial fallacies of elephant conservation, trophy hunting, and the notion of sustainable consumption: that older bulls have no value to an elephant community and can be hunted under the banner of ecological benefit.”

A Facebook page has been set up to ‘actively pursue the truth behind the killing of Voortrekker, the Iconic Desert Elephant, and then decide on appropriate action’ 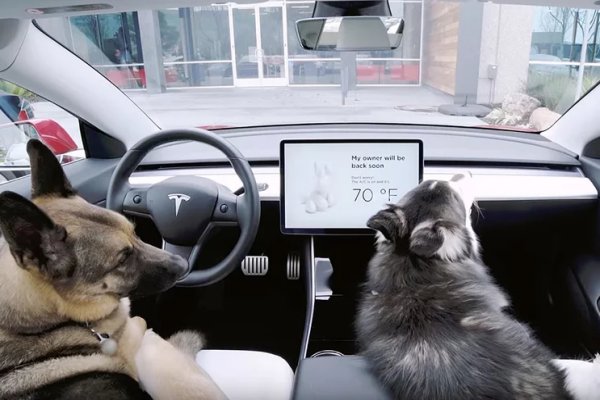 Tesla’s dog mode feature uses automatic sensors to maintain a comfortable temperature for pets inside the vehicle when you have to run errands.

With the latest over-the-air update, Tesla has rolled out a couple of very useful features, some we’re surprised took automakers until 2019 to develop.

These features use the various existing sensors and cameras in Tesla cars to offer new safety and convenience options that owners should find pretty useful.

The first is Dog Mode: This feature uses automatic sensors to maintain a comfortable temperature for pets inside the vehicle when you have to run errands, such as inside a grocery store, while also displaying a message in giant letters to passers-by who might become concerned for pets left in the car.

The message will tell anyone looking inside the car that the owner will return soon and display interior temperature. This feature can be activated via the climate control menu, simply by pressing a button labeled “Dog” within the Keep Climate On option.

Back in 2016, Tesla already offered a Cabin Overheat Protection feature — a more basic version of automatic climate control for when the car is turned off. Dog Mode is the upgrade, offering more user-adjustable settings.

Of course, this system is not a replacement for common sense or local laws, especially when it comes to leaving children in the car.

The second feature is Sentry Mode: This will activate exterior cameras if it detects people near the vehicle and will display a message on the central screen notifying anyone who might be looking inside the vehicle that the car is using cameras to record them.

In case someone actually breaks a window, the alarm will activate, and the car will also blare music at the maximum volume setting. Drivers will need to manually activate Sentry mode each time before leaving the car and plug in a USB drive on to which the car will upload the video.

We have a feeling we know which one of these two updates will be more useful on a daily basis for those who own pets — and frankly just about all major automakers could benefit from a Dog Mode.

By: Jay Ramey  (Jay Ramey is an associate editor for Autoweek) 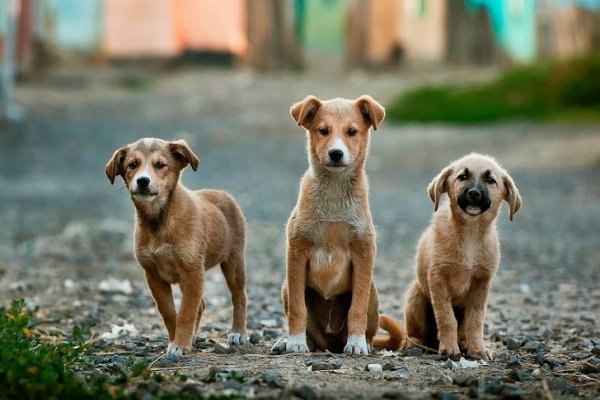 Can you imagine how much greater the world would be without stray dogs? Holland took the lead and saved them by finding them all a home. They’re entirely changing the dogs’ destinies and allowing them to have a life full of happiness and love. The government took specific action to accomplish this by implementing the PSVIR method (pick, sterilize, vaccinate, identify, and return). Thanks to this, in 2016, it became the first country to free these living creatures from the loneliness and terror of the streets. Those of us who love animals want this idea to be copied around the rest of the world.

Bright Side supports these measures that benefit animals and wants to share the details of the method Holland adopted that turned it into a country full of heroes.

Since the 19th century, Holland has had a huge dog population. Almost every family in the country had a dog as a pet because people viewed it as a symbol of social status. But the large number of dogs that lived there sparked an outbreak of rabies which soon became one of the leading causes of death. Out of fear, many owners began abandoning their pets and since this action was considered legal, streets became filled with stray dogs of all kinds. 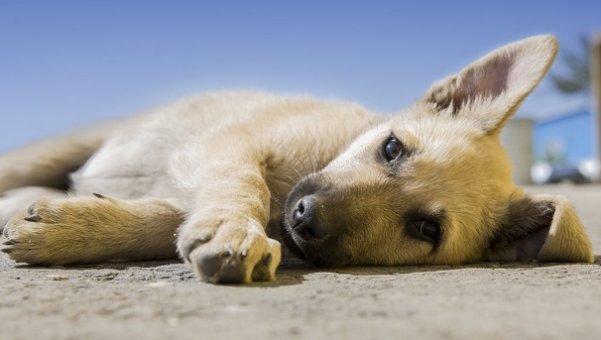 Holland wanted to change these unfortunate circumstances. They began to do this by organizing days in which sterilization and castration were mandatory. All were free of charge; the government covered all the expenses. With this, they were able to sterilize 70% of female dogs. Every dog also had medical examinations to verify which vaccines and medical services it needed. 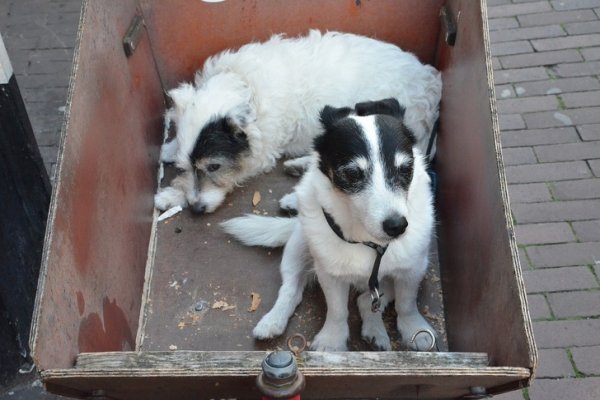 To take more control and end the problem once and for all, the government passed a law that protected animals and approved another law related to animal health and welfare. The new legislation encouraged owners to provide pets with adequate treatment and to eliminate abuse. If owners didn’t follow them, they could be punished with up to 3 years in prison and a fine higher than $16,000.

Higher taxes for the purchase of breeding dogs 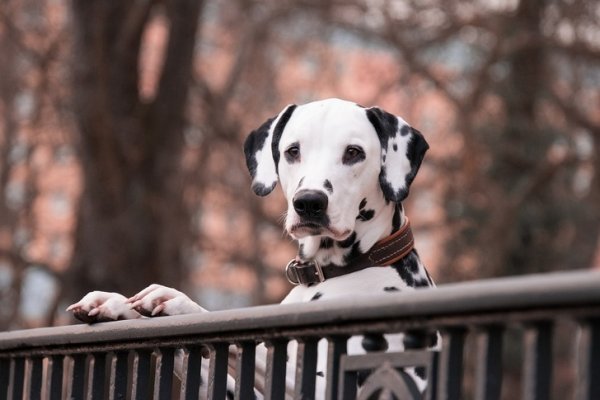 People who decide to have a dog at home usually choose to adopt or buy breeding dogs because they consider them to be more beautiful and healthy. This is why the Dutch government resolved to raise taxes on the purchase of dogs in stores. Consequently, this added expense forced dog owners to start considering other ways to get pets and increased the chance of stray dog adoption. 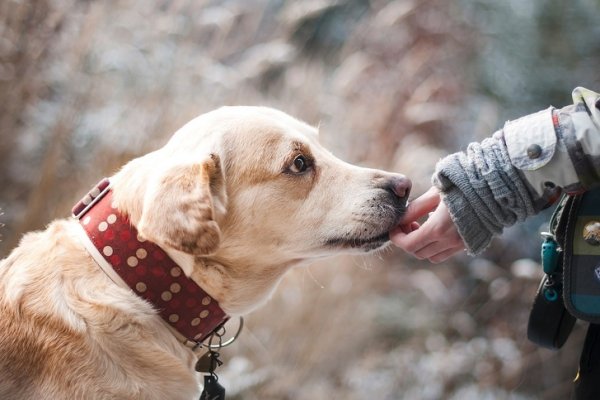 The state also began to run another campaign to raise awareness. This time people had the opportunity to take care of homeless puppies. Slowly but surely, people fell in love with them and over a million stray dogs managed to find a family and a safe place to live. This operation had a massive impact on citizens and led 90% of the population to adopt a dog as a pet.

A happy ending for the puppies 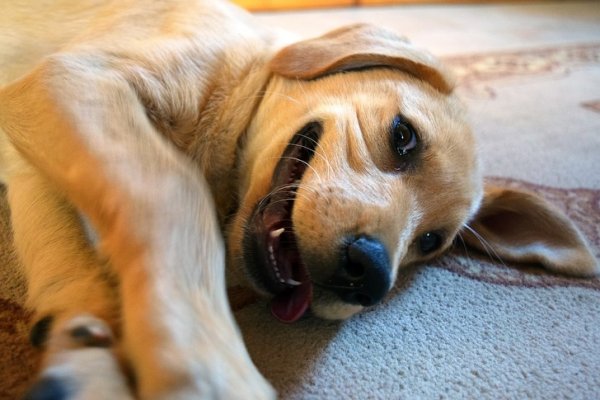 This government program worked against all adversity. Following their achievements, they delegated the job to “Animal Cops” in 2011, a group of policemen in charge of the protection and safety of dogs. Today, puppies living in the Netherlands are not only living comfortably in homes, but they’re also accepted in most of the country’s stores, restaurants, and other establishments.

What do you think of this Dutch initiative? Would you like to see the rest of the world join? Share your answers in the comments and if you’re already committed to helping stray dogs, we’d love to know.