Every pet parent should know how to perform Artificial Respiration (AR) and Cardiopulmonary Resuscitation (CPR) correctly as these emergency procedures can not only save the life of a human but that of your pet too! If possible, AR and CPR should be performed whilst on the way to your closest veterinarian.

Artificial Respiration is performed when a patient has a pulse but is not breathing. You can check for a pulse by feeling with your fingers (not your thumb) on the inside of your dogs’ hind leg where it joins the body. CPR is performed when you cannot feel a pulse and is the process of performing artificial respiration and chest compressions simultaneously.

For medium & large dogs over 14 kilograms

Unfortunately, accidents do happen despite our best efforts to prevent them and sadly, some cases result in the need for either cardiopulmonary resuscitation or artificial respiration or both. Remember that prevention is key so ensure you schedule regular check-ups with your vet to stay abreast of any issues that may cause the need for artificial respiration or CPR to start with.

Heartworm disease, also known as dirofilariasis, is a potentially fatal illness in pets worldwide. Heartworms living in the heart, lungs and related blood vessels of infected pets can eventually cause cardiac failure, lung disease and impair other vital organs in the body.

Transmission
Adult female heartworms residing in an infected dog or cat, breed microfilaria, which are microscopic baby worms that pass into the bloodstream.

The infested larvae pass into the bloodstream, moving to the heart, lungs and surrounding blood vessels where they develop into adult heartworms over a period of roughly seven months. Adult heartworms can survive for up to 7 years in dogs whilst they can only live for up to 3 years in cats. A dog may carry as many as 250 worms in its body and they can measure up to 30 centimetres in length. 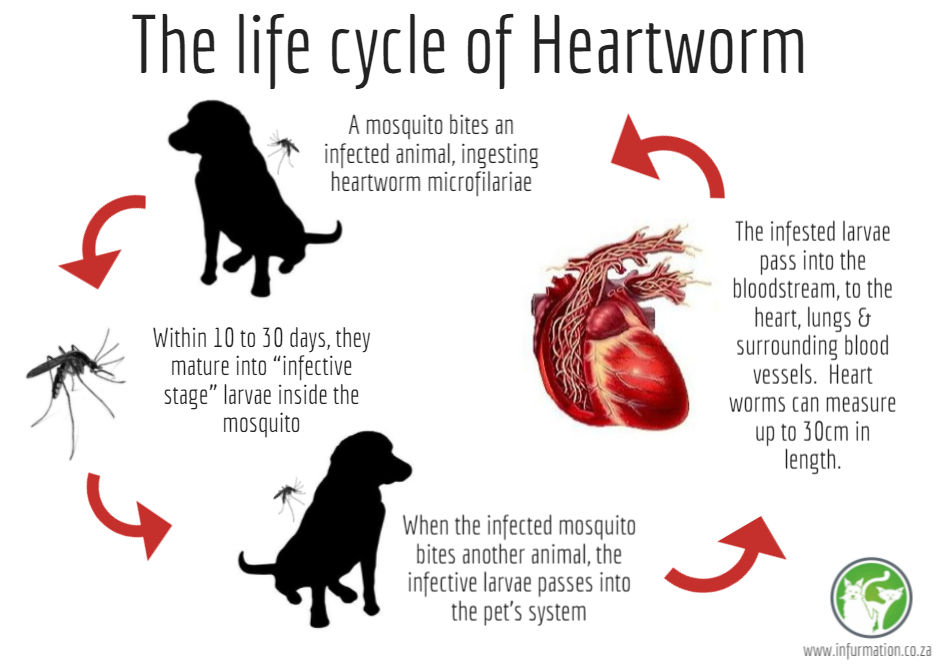 Infection in Dogs and Cats Compared
Heartworms thrive in a dog’s system because they can develop into adults and reproduce in their host. Heartworms cannot grow to adulthood in cats and therefore don’t survive as long. However, even baby worms can cause a severe condition in cats called heartworm associated respiratory disease (HARD). Medication that efficiently treats heartworm in dogs, doesn’t render itself as effective in cats, therefore prevention is key when safeguarding cats from heartworm disease.

DOGS: Infected dogs will usually have a mild, unproductive cough as well as reduced appetite that leads to weight loss. A sudden intolerance to exercise may be experienced, marked by shortness of breath and fatigue, even with regular exercise.

As heartworm advances, heart failure may result as well as a swollen abdomen because of excess fluid therein. Caval syndrome is when the blood flow in the heart is severely constricted when dogs are infected by large numbers of heartworms and this can ultimately lead to cardiovascular collapse. Death is almost a certainty if the heartworm blockage isn’t removed quickly.

CATS: Infected cats may display reactions associated with an asthma attack along with intermittent vomiting. They may have fainting spells or seizures and experience trouble walking. Reduced appetite also leads to weight loss. A build-up of fluid in their abdomen is also a possibility, however, in some cases, the initial symptom is sudden collapse followed by death.

DOGS: Even if your dog is on preventative medication, testing for heartworm should be conducted annually. Testing requires a non-invasive blood test administered by your veterinarian that identifies the existence of heartworm proteins. Positive results from the initial test will necessitate further testing.

CATS: Detecting the presence of heartworms in cats involves using both an antigen and an antibody. X-rays or ultrasounds may also be an option. Prevention of heartworm disease in cats is essential as there is currently no approved treatment available.

Treatment for Dogs?
Several treatments of medication called melarsomine hydrochloride (Immiticid®), are required to eradicate adult worms. The treatment is injected into the lower back muscle, but the associated pain is excruciating which is why patients are ideally admitted to hospital for 1 – 2 days to receive pain control, anti-inflammatory medication as well as intravenous fluid therapy.

The majority of microfilariae are only killed when a second injection is given to the host roughly one month after the initial treatment.

Your pooch will then need to begin a year-round heartworm preventative medication. If a dog has been severely laden with heartworm disease, they are likely to have permanent heart damage which will demand long-term therapy.

Caval syndrome, as mentioned above, necessitates the mature heartworms be removed surgically via a surgically cut opening in the jugular vein. This can almost always be avoided through early diagnosis and treatment.

If a dog is undergoing treatment for heartworm disease, it’s imperative that they are kept calm and quiet at all times, and exercise is prohibited for a full month after the treatment has been administered.

A mild cough can be expected for two months after treatment if a dog was heavily infected. However, if they display shortness of breath, heavy coughing, depression and fever, consult your vet immediately.

Heartworm disease is easily preventable but expensive to treat. Unfortunately, in contrast to their canine counterparts, there is currently no conclusive cure available for cats. With this said, the best approach to defeating heartworm disease is by safeguarding your cats and dogs with heartworm preventative medicines that your vet will prescribe to you.