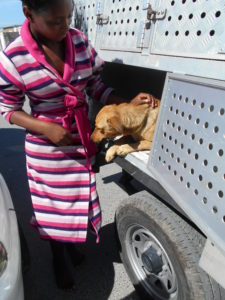 17,000 dogs and cats come through the doors of the Cape of Good Hope SPCA every year. That’s nearly 1500 animals a month.

Pet over-population is a chronic and serious issue in the Western Cape. Just one unsterilised pet and its offspring can produce over 60,000 lives in 6 years! And there simply aren’t enough homes for all these animals.

At the Cape of Good Hope SPCA, we believe that pet over-population and the resulting neglect, abuse, relinquishment to animal shelters and subsequent euthanasia of many of these animals are preventable problems with a rational solution.

The solution is sterilisation programmes.

With this in mind, the Cape of Good Hope SPCA and Infurmation partnered together to offer free sterilisations to residents in Vrygrond, Capricorn Park.

In July last year, the Cape of Good Hope SPCA was approached by a group of Marina Da Gama residents who wanted to do their part to help animals on Mandela Day. Their aim was to speak to animal owners in Capricorn Park about their pet’s health and hand out educational flyers on common pet health problems such as worms, ticks, fleas and mange. Their other goal was to obtain a list of pet owners who wished to have their unsterilised animals sterilised.

The result of the volunteers’ efforts was a list of 32 people with 78 cats and dogs. They were all willing to have their pets sterilised at the SPCA, but were unable to pay for the surgeries themselves.

In November 2016, the Cape of Good Hope SPCA’s Education Team began visiting the houses on the list, one by one, collecting animals to be brought back to the SPCA Animal Hospital in Grassy Park.

Unfortunately, many residents were sleeping during the day when our Education Team knocked on their door, which meant that we weren’t able to sterilise their animals. However, the team visited other local residents to offer free sterilisations and, as with every community we reach, some people were willing but others couldn’t be convinced about the benefits of having their animals sterilised.

But the team persevered and once the sterilisations were completed, the animals were returned to their owners who were extremely grateful for the veterinary care their animals received.

In less than a month, we were able to st 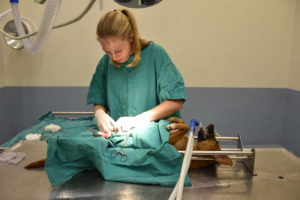 The long term benefit of this project will be a reduced number of unwanted litters, improved health and welfare, a decline in aggressive dog behaviour and a reduced amount of strays. It will also help to reduce the phenomenal costs that animal shelters, municipalities and the public carry due to addressing these animal welfare problems.

By working together, the Cape of Good Hope SPCA and Infurmation recognised the cause rather than the symptoms of the dire state of animals in Cape Town’s informal settlements and made a lasting impact on their lives.