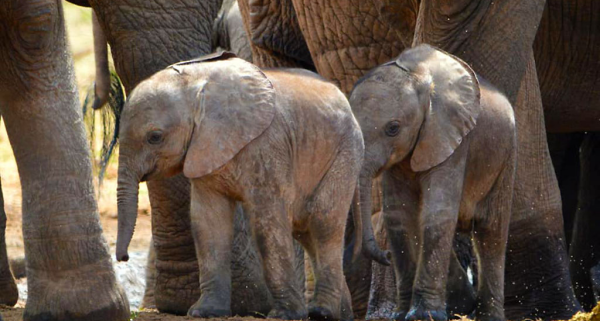 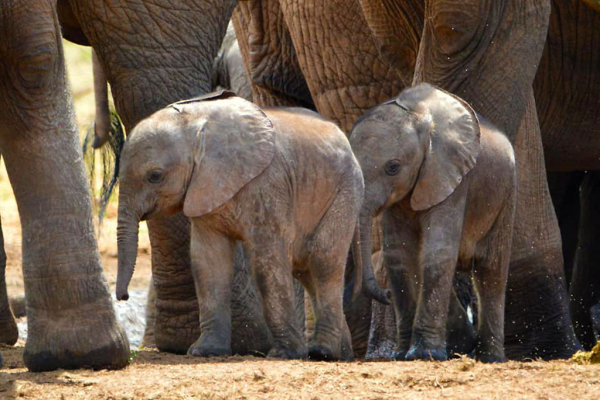 Two baby elephants, which appear to be twins, have been spotted in Addo Elephant National Park in the Eastern Cape. Multiple births make up 1% of elephant birth rates, making it an extremely rare occurrence and sighting.

These two littlies were photographed by Jan Smit in January 2020, who shared the images on Facebook. Ranger Christo Boshoff also shared his photos of the pair at the Ngulube Waterhole in November 2019. 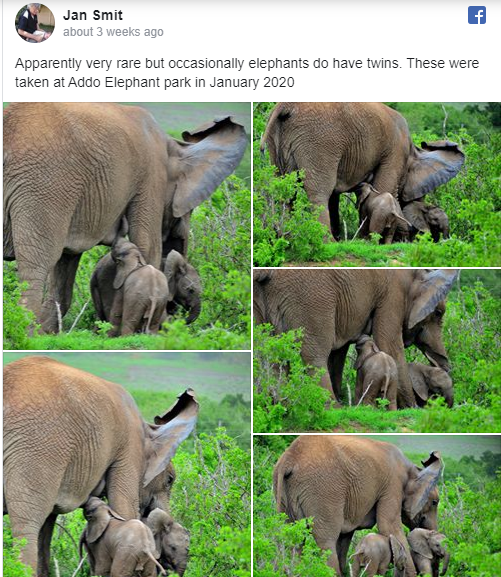 Other sets of twins have been born in Addo Elephant National Park in the past. Twins named Dawn and Dusk who were born in 2004 and were the third set of twins to be recorded in the park at that time.

In December 2014, a 31-year-old elephant named Curve gave birth to twins, named Shaka and Dingaan, in Pongola Game Reserve in northern KwaZulu-Natal. At the time, elephant specialist Ian Whyte explained that typically one calf ‘hoards access to the milk and the less dominant calf cannot feed enough to survive.’

Scientists left Curve alone to try to provide her with a stress-free environment to help her ‘beat the mortality odds’. Despite the drought in the area at the time, which could have affected Curve’s ability to take in sufficient nutrition and in turn affect milk production, the twins thrived.

We spoke to elephant researcher Suzette Boshoff from White Elephant Safaris. Boshoff monitors the elephants and said that the twins, who are five years old and who have currently crossed the border into the Royal Jozini Private Game Reserve in eSwatini with their herd, ‘ are doing fantastically well.’

Below is a video of the twins when they were just two years old and still adorable.

News from the field of Research:Our twin elephants; Dingaan and Shaka are almost 2 years old! Here they are accompanying their Mom, Curve and their older brother, Luke..Enjoy!#JoziniPongola#WatchThisElephantSpace

News from the field of Research: Our twin elephants; Dingaan and Shaka are almost 2 years old!  Here they are accompanying their Mom, Curve and their older brother, Luke..Enjoy! #JoziniPongola #WatchThisElephantSpace

Part of the reason for the pair’s successful growth was that they were also nurtured by Constance, a young matriarch, who along with Curve had been orphaned during a culling in the Kruger National Park. Constance had lost calves and had a few stillborn babies and so her nurturing instinct was fulfilled in helping parent Shaka and Dingaan.

Other instances of recorded twin elephants include the birth of a male and female set of twins in Tanzania in August 2017. The two calves were dubbed Elon Tusk and Emma and were the offspring of Eloise a 57-year-old female and perhaps the oldest elephant to have given birth to twins.

These siblings were fortunate, as their mother was the matriarch of the herd and her ‘experience and wisdom’ helped contribute to their successful rearing.